I didn't do any work on the layout this evening other than laying out track trying to figure out the new Bureau Junction.  Sometimes things on paper look better than reality.

I came up with a plan I like.  You'll find our artist's rendering of the new proposed Bureau interlocking. 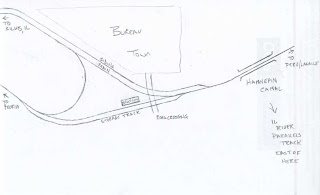 #1) I had planned for the Peoria Branch to loop back from the mainline toward my former CNW branchline.  That's all good on paper, but reality set in when I realized that the line would have to drop quite a few inches to make it under the RI main line over by East Rock Island.  The grade will be steep, but I believe with the right scenery (heavily forested) it should be fine.  The grade out of the old Peoria was ultra steep, but was hidden behind the TV.

#2) The radius for the turn back on the Peoria branch will be tight.  It appears 12" is the best I can do in the area I have to work in.  It shouldn't be a problem for the 4-axle power, but the 6-axle power might have issues.  While railfanning the line virtually (staring at the benchwork dreaming of trains running through the new interlocking) I recalled that the ROCK had a pair of Peoria to Chicago trains.  Currently, I run a pair of Peoria to Silvis trains.  Considering majority of the traffic on these trains continues on to Chicago anyway, I'm thinking of switching to the new freight trains.  Any traffic bound for Silvis will be dropped off at the new Bureau storage track for the IL shorts train to pick up later.  So, that basically eliminates any regular train traversing that leg of the wye.  The local trains will have to turn using that wye, but they will have to do so at restricted speed to negotiate the tight radius.

Train Number Changes on the ROCK
Trains #92 and #93 have been annulled indefinitely.
Train #90 Peoria to Chicago and Train #95 Chicago to Peoria have been added.

Project Nolix continues.  Engineers unscrewed all the risers from East Rock Island to East Bureau raising them a total of 1-3/4" over the span.

.
Posted by Steven Johnson at 8:44 PM No comments:

Larry, of the Lehigh & Hudson River Railroad, came up today.  We cut and installed three sections of the benchwork up to Utica, IL.  The smell of fresh lumber is intoxicating to the engineers.  They are ready to proceed forward with Operation Nolix.

The next step will be raising the risers for the mainline out of Rock Island east through Bureau to the new benchwork. 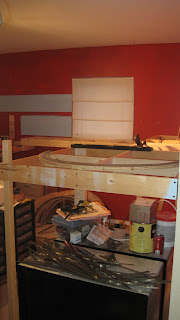 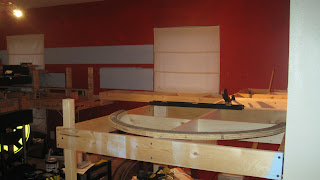 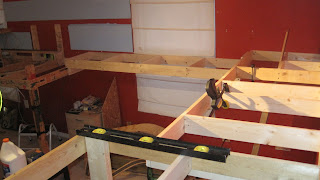 Posted by Steven Johnson at 6:34 AM No comments: