I read an interesting post off the Yahoo OP Sig group this past week.  To summarize, when operating under Timetable & Train Orders (TT&TO) before the days of radio, local crews would stop at the local depot upon arriving in town.  They would be able to get an update from the station agent on the status of scheduled trains as well as any extras out on the line.  The station agent would also be able to inform them of any work required at the local industries. In the past, I had simply pulled into town and started working.  It won't be a requirement for my crews, but I like this idea and plan to implement it personally when operating.  I will mention it in future sessions.  It's not a race.  Let's go out there and work safe!

Sorry, it has been a while.  I have been busy with other stuff, plus took a break from the model trains for about a month.

Even thought Management has been on vacation, our engineering department was still busy at work though. They had considered the idea of removing the ovalix to replace with a long grade (adding two towns) to access the second level.

The ROCK's board of directors met the other evening to discuss plans. The board approved to move forward with the removal of the ovalix and expansion of the mainline. Massive construction will be underway in the very near future as the built in cabinets and shelves will be removed (and re-purposed) under the new bench work.

Below are artist renderings of the proposed changes: 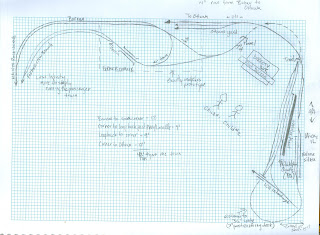 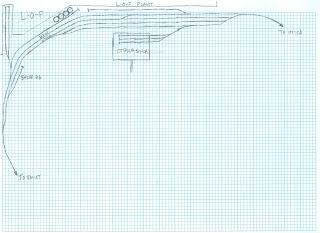 - Bureau wye will be revised to more accurately reflect the prototype. A storage track will be added for car block swaps.
- The existing Peoria Branch will be completely removed. It will now travel the opposite direction down the former roadbed of the Clinton IA branch and act as a smaller town with limited industries.
- A two track yard plus passing siding will be added to Peru/LaSalle.
- Peru/LaSalle main industry will be the large WestClox plant. If possible, the Peru Power &Water Plant will be on the west side of town. A two-story passenger station will be added.
- Utica will be kept at single track due to the limited space. Industries will include the Philadelphia Quartz and Belrose Silica plants.
- Ottawa will have a new three track yard and longer passing siding. Major industry will be the Libbey-Owens-Ford plant, Bader Ag and the Ottawa Silica mine.

Operational changes
- Former #217 Chicago to Ottawa local will now originate in Ottawa. The local will work Ottawa, Utica and to Peru/LaSalle and return.
- #130 Peoria local will still operate, but mainly before or after the session. It will not be a regular train.
- #110 Illinois Shorts local will operate from Chicago to Davenport (Silvis) and return. It will swap blocks of cars for Joliet, Ottawa and Bureau.
- Davenport Yard will be renamed Kelly Yard, Silvis, IL. The Mississippi River Crossing will be off the layout to the west. The existing bridge will be the crossing of the Rock River which is more prototypical to what I have in place now.

So, big changes ahead for the ROCK. This will allow for the layout to be a better representation of the Rock Island in the 70s. Far from perfect, but a reasonable attempt. I'm quite pleased with the changes and look forward to operating on the new ROCK!


Welcome to the Summer of the ROCK!
A clip from my favorite TV show Seinfeld and the Summer of George:
http://www.youtube.com/watch?v=PADcL1np7BE
Posted by Steven Johnson at 1:29 PM 2 comments: