Doped up on medicine due to a sinus infection, I have made some progress.  Some might question the quality of the work under my medicated state.  We'll send out crews tomorrow after the haze has lifted to see if the work is acceptable.

Installed a pair of turnouts and slide switches at the Burr Oak engine house.  Originally, there was only room for five locos on one track.  It has now been expanded to handle eight locomotives plus two or three cabooses on two tracks.  Crews will be boarding their power at the engine house and then backing onto their train to depart Chicago. 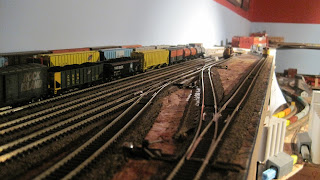 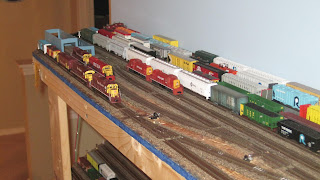 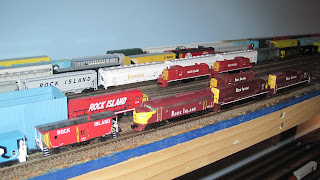 Unloaded the bird shot out of a box of 25 shells that I picked up in Illinois.  Bulk bird shot was hard to find and from what I understand only sold in large quantities.  The $6 box of bird shot shells was more than enough for what I needed.  Used the bird shot to fill some coal and wood chip hoppers this evening.  The added weight helps the cars track better preventing them from picking turnouts.

Posted by Steven Johnson at 9:30 PM No comments:

From the Big Bang Theory

From the Big Bang Theory "All these years, I have been so wrong. The tinier the train, the more concentrated the fun!" My thoughts exactly about converting to N scale last year. :-)

Posted by Steven Johnson at 8:29 PM No comments:

I'm very happy to report that I was able to successfully install three very troublesome slide switches in Peoria.  There were in a tight spot next to the wall causing it to be extremely difficult.  I felt good tonight and decided to tackle it.

Repaired a known troublesome floating slide switch in West Davenport Yard.  Tightened it up so it makes a good solid throw in each direction.  I have one more slide switch to install in West Davenport and then I'm done.  At least I think I am.  I need to take a trip around the railroad to make sure there are no other stragglers that were never installed, but I'm pretty sure they are complete but the one.

Consulted with the Foreman at Peconic Shops tonight regarding my U30C fire.  We feel we have identified the problem yesterday and have a plan to correct the issue for the next install.  The decoder went off to TCS today for repair/replacement.
Posted by Steven Johnson at 9:24 PM No comments:

Worked a while on installing a decoder in a Kato U30C.  I thought I was doing well.  Placed it on the track and

Closed up shop after that.  No use continuing working after a major electrical failure.  We'll take a stab at it again tomorrow.
Posted by Steven Johnson at 8:52 PM No comments: