Saturday ~
Cut and glued the competing railroad track and majority of industry tracks for Blue Island.

Looking toward Blue Island from the CB&Q Crossing at Joliet

Need more track for this.

Looking back toward West Blue Island 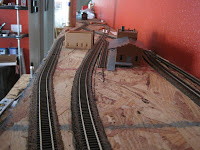 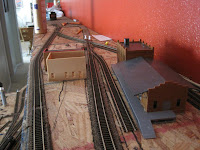 Main on right, siding on left.  Freight house on right.  Chicago Wholesale foods behind along the wall.

Another view of Blue Island with staging in the lower left.  View of former competing railroad crossing the main and traveling behind the freight house where it crosses the main again near the lumber mill.
Posted by Steven Johnson at 5:04 PM No comments:

Track crews took the night off as they were called out for domestic issues for the CEO, but progress was still made earlier today by the clerical team.  Clerks worked on the tedious process of creating waybills, asset management, and fulfilling customer requirements.  I created a spreadsheet to list my industries including spot capacity, commodity shipped/received, required car pool, and desired frequency.  I then compiled a list of all my cars including the car pool type, reporting marks, etc.  I then began matching up industries with the requested car pools to create 4-cycle waybills.  I have them all created except for the grain covered hoppers.  I will work on that tomorrow.  Regarding the waybills, I only have a generic "off layout" set currently.  Tomorrow, I will review each waybill and assign a routing for the car to depart and enter the layout.

This was a big step toward the operational goal in November.  I'll be glad to get this part over.  I'm anxious to move forward and start scenery.
Posted by Steven Johnson at 9:37 PM No comments:

Residents cheer with praise as the first test train pulls up to the station in Blue Island!

A small piece of benchwork was engineered and installed at West Blue Island.  The mainline has been cut and tested from the CB&Q connector track in Joliet to just past the freight house in Blue Island.  Track Foreman A.T. Little reports that crews are still on schedule for completion by the end of Labor Day Weekend.
Posted by Steven Johnson at 1:41 PM No comments:

Progress continues as crews lay the groundwork for laying rail in Blue Island.  Cork for the main and siding were laid from the first diamond in West Blue Island to staging. The cork was laid out (not glued) for both staging in Burr Oak Yard (Chicago) and West Davenport.  Crews are expected to start laying track Tuesday evening.

Management has declared that all track for Phase I will be complete by the end of Labor Day weekend.  Crews must push forward to keep this ambitious goal!
Posted by Steven Johnson at 7:45 AM No comments:

Here are photos of the newly built paper mill in Joliet, IL.

Truck loading docks in the front.  To the right of the kraft mill will be storage piles of wood chips

Another view of the plant.

A view from the CB&Q main.
Posted by Steven Johnson at 9:19 PM No comments:

Phase III of the Chicago, Rock Island & Pacific layout has been announced.

As stated previously, the Rock was blessed by the creative talents of the Peconic Railroad.  Within (literally) five minutes, the phase III concept was born.

As CRI&P officials gave Peconic management a tour of the facilities in Davenport and in particular the Chicago & Northwestern branchline/yard lead is where discussions began.  The original plan was for the C&NW trackage to continue out behind the Mississippi River as far as it could go before ending at the first obstruction (riser).  Larry suggested to curve the track around the riser and continue on further if need be.  Both management teams then had an epiphany.  It was pondered, why couldn't the C&NW tracks continue on as a sublevel below the main Rock scenery on the first level.  Discussions continued and it was decided that the C&NW could feasibly follow along the wall behind the Mississippi River, curve underneath the CRI&P mainline into the first scene.  The scene would host a small wooden grain elevator with no more than one or two spots.  The line would then curve back under the CRI&P mainline and reappear east of the Bureau station creating the second scene.  This scene would also host a small wooden grain elevator.  The line would continue on underneath the ovalix which will act as staging.  A train with 8 to 12 cars would depart staging, work the two grain elevators, work the newly designed industry flats behind the yard ladder at Davenport and swap out any interchange traffic.  This would create another job during operations and provide some operational interest.

As always, it is a pleasure to have the management team from the Peconic Railroad on site.  Their creative influence is incredible.  Officials from the Chicago, Rock Island & Pacific have learned to never discount any ideas provided by the Peconic no matter how bizarre they might seem.  The Peconic's ideas have been implemented on almost all occasions.

Thanks again to Larry Keller and the Peconic Shops on their continued dedication to the Rock Island Railroad.
Posted by Steven Johnson at 12:38 PM No comments:

Not much progress, but progress nevertheless.

Officials from the Peconic Railroad visited the Rock today.  The Peconic Railroad approves of the plans laid out by the Rock's engineering team.  There was only one slight modification requiring the movement of the station to the junction of the new mainline and the former competing railroad.  Also a small connector track between the competing railroad and the new mainline will be abolished.  Officials found the redundancy of connector tracks to the main and siding not necessary.

The Peconic management surveyed other progress since their last visit including Stockdale, Joliet, Davenport Yard and Rock Island's industrial area.

Peconic Shops foreman inspected the #454 RS-2.  It was decided to swap chassis' as the electronics in the originally installed unit had picked up the alzheimers.  After reprogramming pertinent locomotive information, the #454 was tested and running well again.  Peconic Shops crews then looked at the troubled passenger fleet.  These particular cars are most troublesome.  Factory equipped wheels are too wide, replacement metal wheels create shorts, and plastic alternatives don't provide proper tracking.  After working for quite a while on the fleet, it was decided by management to sell these units at auction.  Peconic Shops did take one particularly testy unit back to their home shops to dissect the problem for research purposes.  Before Aunt Maude can form her protest group in Bureau, it was also announced by the Rock that the passenger fleet will be replaced with equipment from the Peconic Railroad.  It is expected that the Rock will take delivery of these in late September.

Later, construction crews worked through the evening constructing the Stock Paper Company in Joliet.  The large buildings towering over Joliet is quite a site.  Locals applaud the industrial progress made in the town.

Track crews are expected to begin construction Monday or Tuesday in Blue Island.  Management is excited as the last bit of track is nearly complete for Phase I.
Posted by Steven Johnson at 12:24 PM No comments: